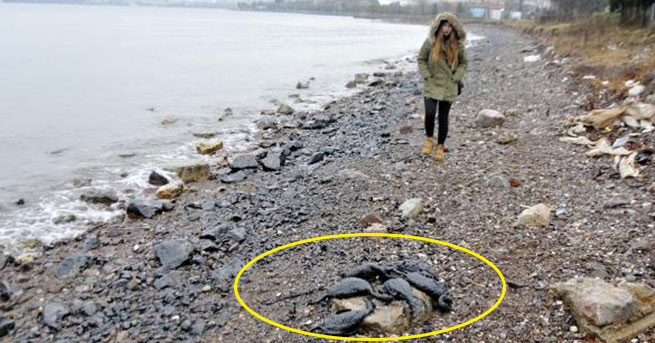 Fuel leaking from Poliport at Izmit Bay near Bosphorus

On 12 January 2017, the Governor of Kocaeli decided to take samples from Tüpraş’s land tanks in connection with the sea pollution that took place in Izmit Gulf due to fuel leaking from Poliport land tanks to the sea.
On January 12, 2017, CST700 type fuel oil leaked from the land tanks of Poliport Port, causing sea pollution in Izmit Bay and threatening living marine life.

On the other hand, on January 13, 2017, EVYAPPORT, which is 15 miles away from Poliport Port, CST1600 type fuel emerged in 28 areas, including Tupraş, DP World Peninsula and Harikalar Beach, where marine pollution is detected and dozens of sea birds are wasted “Izmit Gulf Is there another facility in the east of the city or a fuel leak from the ship? ” He brought the question to mind.

Due to the second level of sea pollution, Kocaeli Governor Hasan Basri Güzeloğlu Presidency decided to take the samples from the areas where sea pollution occurred.

The samples has been not taken from the Petroleum Processing Facilities located in the Gulf, including the Poliport Kara Tanks, where marine pollution occurred, sampling from 3 marine areas, and the first leak.

The performance of the Ministry of Environment and Urbanization started to be questioned due to the second level sea pollution that occurred in İzmit Bay about 20 days after the M / V LADY TUNA sea accident that caused sea pollution by landing on İzmir Cesme openings last month.